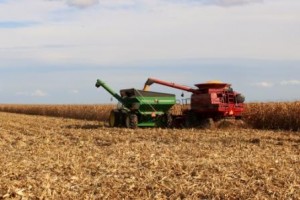 Autumn is here and as I was trying a new recipe with my mother for apple cake, our conversation turned towards the changing landscape.

We are in the midst of harvest season.  Much of the corn and soybeans which surrounds us is being combined (a large machine which harvests crops) out of the fields.  No more “corn corners”- a term those of us in rural areas use to identify intersections in the country where the visibility has decreased significantly due to the height of the corn. The landscape has opened up again and we can see far and wide.

My mother pointed out that we didn’t have as many “corn corners” this year, because quite a bit of the farmland around Northern Iowa didn’t get planted.  This was mainly due to the unusual snow and flooding we experienced in May- prime planting time.  Many farmers were frustrated because they couldn’t get into the fields early enough to plant the traditional crops of corn and soybeans, because the soil was so wet.

But some farmers were able to plant a cover crop to prevent erosion, helping to sustain the health of the land and also to produce something off the land.  For the most part, these are the farmers who own their land and have a vested interest in its sustainability over time. 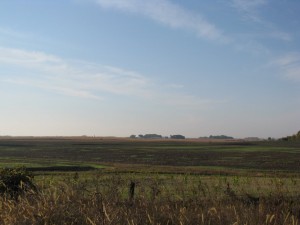 Those farmers, who don’t own the land, often do not see the value in planting cover crops and leave it bare or “fallow,” many of them even turn to spraying it with herbicides to prevent weed overgrowth which could have a negative impact on next year’s yield. Unfortunately, we are seeing more and more land lay fallow due to the increase of rented farmland.

I am very familiar with the challenges that go along with farming. It’s a business that is impacted by so many uncontrollable factors such as weather, the markets and gas prices but good farmers can see beyond the quick buck and plan ahead for future growth.  That’s why it’s so important to support those farmers who own the land and take pride in the proper care of it, so that they may pass it along to the next generation.  I see it in the way my father cares for our land, with an eye on the future, not on the price tag.

During this fall season I hope you take some time to think about the challenges many farmers face and support those who are true stewards of the land. Thank you for your support of traditional independent family farmers- we are grateful.