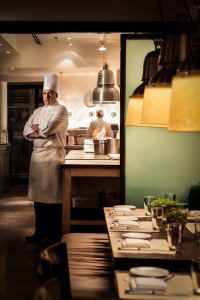 “As a country boy from Pennsylvania, I grew up loving animals, knowing the importance of how they should be raised. Niman Ranch has the best tasting meat because of how their animals are treated, respected and care for. It is my brand of choice.”

Chris Beischer was born and raised in Pennsylvania and started cooking at age of seventeen. He decided to formally train as a Chef at the world-renowned Le Cordon Bleu School in Paris and graduated at the top of his class. Chris’ first job in New York was at the famed Quilted Giraffe. After a memorable dinner at Lafayette Restaurant with Chef Jean-Georges Vongerichten, Chris discovered a cuisine that spoke to his senses and decided then that he would next work for Jean-Georges at his first restaurant, JoJo.

Chris moved up to Chef de Cuisine in 1997, earning him high praises. In 2000, Chris moved downtown, taking the helm at (The Mercer) Kitchen, with its pleasing and cutting-edge cuisine that works so well with the sleek multi-textures décor of leather, brick, glass and stone. Over the years, Jean-Georges has closely relied on Chris’ artistry and skills to train chefs from other restaurants to the Jean-Georges’ culture of taste and excellence.  Chris has been part of the opening teams many of Jean-Georges’ ventures, cooked at the James Beard House, and sits on the advisory board of two culinary schools.

We’re honored that talented chefs like Chris have a commitment to cooking with the finest tasting meat in the world. We can’t wait to taste what he comes up with for the Farmer Appreciation Dinner this September!