A visit to the Alderland Farm 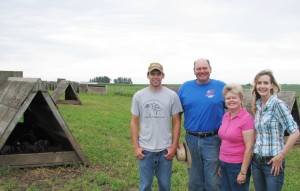 Recently I visited the Brown family at their farm in New Providence, Iowa.  They are a part of the network of family farmers who supply pigs to Niman Ranch.  It was a beautiful drive about an hour and a half south of my house.  I couldn’t help but notice that there were many fields that remained bare because of the record amounts of rain we received in May, our prime time for planting here in Iowa.  Unfortunately, some fields won’t be planted because not enough time remains in the growing season to produce any kind of yield.  Many farmers may plant cover crops to prevent erosion and to have something on the land.

When I arrived at what I thought was the Brown farm, I was confused. There was a sign posted in the yard that said: “Alderland Farms.” I thought I may have gone to the wrong property.  But then I saw Paul Brown, who gave me a warm welcome and invited me inside their farm house.

Paul must have seen the confusion on my face about the sign and explained that because there are so many Brown’s in the area, he and his wife Andrea wanted to name their farm something more unique to eliminate possible confusion between them.  They decided to create a distinct title for their farm made up from a combination of letters found in each of their children’s names.  Their farm is beautiful with pigs grazing and milling about the pasture, which is dotted with A-Frame pig houses set on a sprawling pastoral landscape. 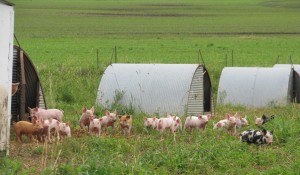 Andrew Fink, a new marketing coordinator for Niman Ranch, joined me at the farm for a tour to see first-hand what a Niman Ranch pig farm looks like.  Raising pigs for Niman Ranch is only part of the Brown’s entire operation.  Heritage breed chickens were running about in a field where a chicken tractor is used for shelter and rotation.  Brown’s son, Derek, a previous Niman Ranch Next Generation Scholarship Award Winner, joined us and led us out to the pasture where they had farrowed pigs earlier in April. 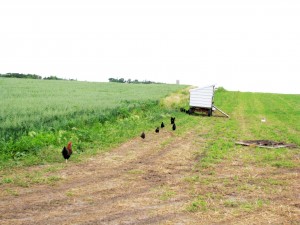 I was amazed at how calm all of their pigs were. They barely even looked up as we walked through the pasture.  This is a good sign, indicating the pigs are used to plenty of attention. While out in the pasture I saw one of Paul’s sows gently, in slow motion, lie down with her piglets.  This trait is what is called good “mothering ability”.  By gently lying down the sow won’t crush her piglet.  A sow with bad mothering ability would just flop down.  This is all part of the expertise that is passed down through the generations of family farmers.  The Brown’s have taken the time to identify and select the right qualities for their breeding stock.

Later on, Paul Brown said there are two types of farmers, those who prefer to work with livestock and those who like dealing with the crops.  He told us that Derek was more interested in the pigs while his other son Landon was more interested in the crops. Their daughter, Allison, also a recipient of the Niman Ranch Next Generation Scholarship, rounded out the family with her interest in culinary arts.  Sounds like the perfect arrangement to me.  Thank You to the entire Brown Family!